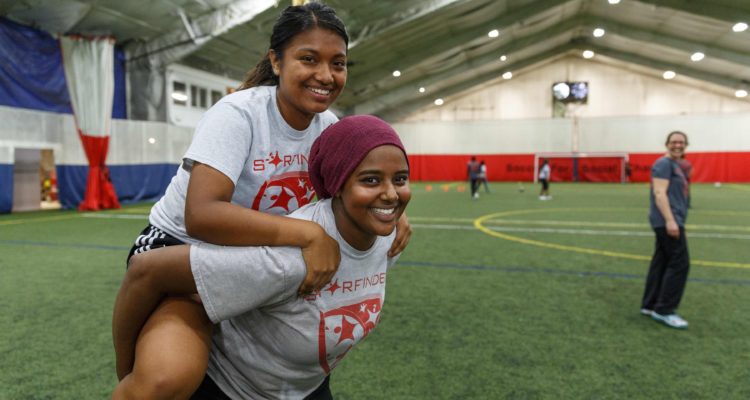 The U.S. Soccer Women’s National Team (USWNT) didn’t just announce its entrance onto this year’s World Cup stage. On June 11th, when the defending champions took on Thailand in their first match, they shouted their return, each goal in their record-breaking, 13-0 victory a rallying cry that echoed to every corner of the Internet. It was the latest demonstration of their dominance, a chapter that’s included snagging four Olympic gold medals and three out of seven titles since the first Women’s World Cup took place in 1991.

The women pros’ success seems to have translated to more female teenagers kicking a ball around: The number of girls playing soccer in high school nationwide increased by over 21 percent from the 2005-‘06 season to the 2017-’18 one, according to the National Federation of State High School Associations. However, Pennsylvania hasn’t followed that trend; girls’ high school soccer has hovered around the same total here for the last 10 years. Part of the issue might be this generation’s pay to play model (the New York Times describes the as the “the better an athlete, the more money a parent shells out”), which has transformed soccer from an everyman everywoman’s sport into a closed-off discipline that only the affluent can afford, at least at elite levels.

The Starfinder Foundation is here to help. The Manayunk-based organization uses soccer as a vehicle for youth development in low-income areas of Philly, translating the lessons of discipline and resilience learned on the field into success in academics and adulthood. Recently, it was one of five organizations that received a grant from the U.S. Soccer Foundation to bolster programs for girls.

“We are always emphasizing gender equity — that girls must be served as well as boys,” says Heidi Warren, the executive director of the Starfinder Foundation. “That’s not the norm. Not because anyone’s trying to exclude girls but because you have to recruit girls in a different way. You have to structure the programs with their needs in mind. If you’re not intentional and thoughtful about serving girls, they tend to get left behind.”

The $22,500 will go toward training Starfinder’s female alumni to be the next wave of coaches for their programs as well as developing its middle school program. So far, the organization has focused primarily on high schoolers. Its participants in that age range undergo soccer training one day per week while a second day is devoted to speed and agility training (what staffers call “focused fuel”) as well as a curriculum that emphasizes leadership and life skills.

“It goes through a progression over the course of seven months,” Warren says. “We start with things that relate to self — internal skills — then things related to interpersonal reactions; how do I relate to people around me, how do I build healthy relationships. We’re able to integrate social-emotional learning but also things that are topical in the moment: the #MeToo movement and consent, immigration, police brutality. We bring the things that are impacting our kids in the world into a space where we can talk about it in a way that’s safe for them.”

Starfinder’s middle school efforts will involve a lot more collaboration with local schools. For starters, this fall the organization is hosting all the practices and games of the intermediate tier in the Philadelphia school district’s middle school soccer league. (There are roughly 30 teams total in the league, and about eight fall in that intermediate tier.) Warren says Starfinder will help to run the practices as well as provide coach training and some transition workshops to help the kids think about what they want to pursue at the high school level. Additionally, Starfinder is partnering with charter schools to bring students in for clinics and working with existing independent clubs to develop a new grassroots soccer league.

One of the goals wound up in all of these new initiatives is to bring 300 more girls into Starfinder’s sphere in three years. Although Starfinder’s programs are co-ed, Warren says its messaging and recruitment strategies are different for girls and boys. While the boys just want to play soccer, for instance, the girls want to hear about all the other stuff — the opportunities for social connection and academic advancement. There are often gender norms that work against girls’ participation in sports, especially in Philly’s immigrant communities where the expectation sometimes remains that girls stay home to help with the household, so Starfinder has to work with some of those families to make them feel comfortable.

“One of the ways we try to address that kind of thing is by having great female role models, both for our boys and for our girls,” Warren says. “Everyone needs female role models that are athletic and strong and confident and relatable. They need to be people of color and come from the communities our kids come from. [Our coaches] look like our kids; they have the same accents as our kids. When you can see yourself in someone, then you can see yourself following that pathway.”