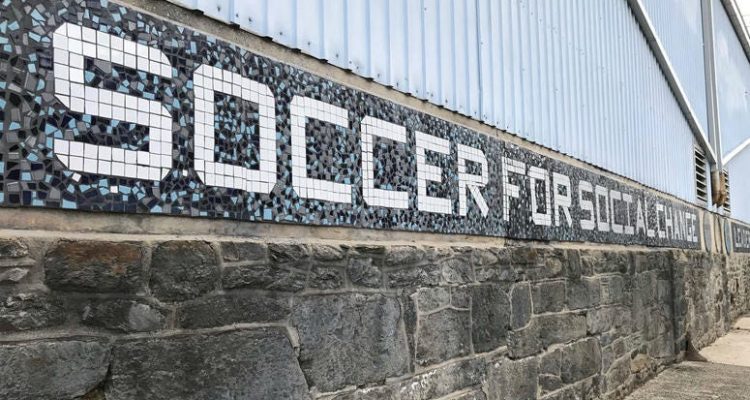 Right before the World Cup started, the U.S. Soccer Foundation awarded grants to several organizations to get more girls involved in the game. One of those organizations is the Starfinder Foundation, which serves around 900 young people in Philadelphia.

“We use soccer to engage young people and help support them on their path to success in their lives,” explained Starfinder Executive Director Heidi Warren.

She says the success of the U.S. Women’s team couldn’t have come at a better time.

“We got a three-year grant from the U.S. Soccer Foundation, and they’re looking to support organizations that have developed great programming for girls and who are very intentional about getting more girls in the game,” she said.

The grant money is slated to beef up the organization’s already successful high school program, expand outreach to middle school girls, and do more with the mentorship aspect of their work. And Warren is hopeful that the U.S. team flourishing on the biggest stage of them all may draw more girls, she says, not just on the field but to be leaders off the field as well.

“When our girls can see powerful, fierce, incredible athletes who are female, who come from different walks of life, that says to them, ‘I can do this too!'”

While there has been growth in the women’s game, the U.S. Soccer Foundation would like to reverse some other trends.

The organization, citing the Women’s Sports Foundation, says girls have 1.3 million fewer opportunities to play sports than boys do.

The foundation says by the age of 14, girls drop out of sports at two times the rate of boys. And only around 16% of youth sport coaches in the U.S. are women.

Warren says growing the women’s game is important, but success goes beyond what happens on the field. A Starfinder slogan, displayed behind the nets on their indoor soccer field, and spelled out in a mosaic on the outside of the building, is “Soccer For Social Change.”

With members of the U.S. Women’s Soccer team speaking out as advocates for equal pay, for example, Warren says young girls — and boys — in their program can see the slogan in action.

“It changes everyone’s mindset about gender roles, about gender norms — and that’s to everyone’s benefit. Because when girls have more and more opportunities to succeed, everyone benefits,” she said.

Starfinder’s Director of Programs Samantha Swerdloff agrees. She says the way members of the U.S. Women’s team have handled social issues is what sets them apart from the three World Cup-winning U.S. teams in the past.

“I think what’s different is their civic engagement. (They’re) using their platform in a new way. It’s powerful for kids to see — you can be a changemaker.”

Warren shared an example of a former Starfinder member, a girl from Sudan.

It’s that type of action Warren says she would love to see more of.