Going to Russia! Starfinder representing the USA at the World Cup 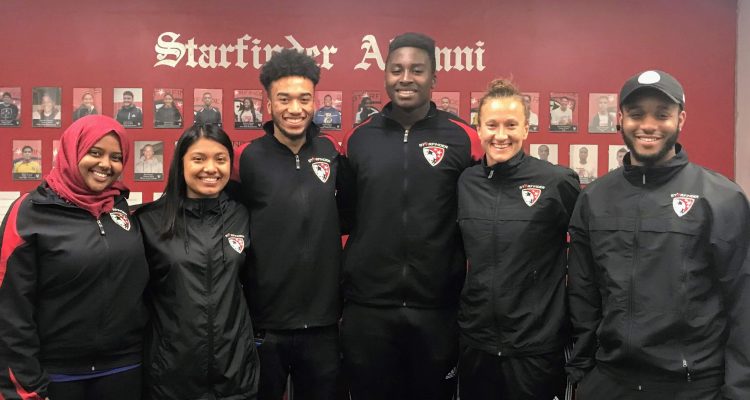 Philadelphia, PA – June 20,2018 – Starfinder is one of 3 organizations representing the US at the FIFA Foundation Festival (formerly “Football for Hope Festival”), an official event of the 2018 FIFA World Cup in Moscow, Russia this summer.  They will be joining 47 other delegations from across the globe for the festival, which runs from June 26th to July 2nd.

The festival will focus on intercultural exchange, allowing delegations to share best practices and showcase their work. The festival will end in a “fair play” tournament, a match with no referees.

The FIFA Foundation Festival is an initiative set up by FIFA to celebrate the power of soccer for social change. Starfinder participated in previous festivities in South Africa and Brazil.

“This will be a life-changing experience for our youth participants and Young Leader. They will be meeting their peers from all over the world,” said Heidi Warren, Executive Director. “We know from our past delegations that it’s a real eye-opener to learn about other kids’ lives.”

Heidi added that the friendships they develop in Russia have the potential to be long-lasting. “Our teens who traveled to Brazil in 2014 are still in touch with many of the friends they made during the festival.”

Going to Russia … Follow their adventures at the World Cup! … FOOTBALL4GOOD Magazine highlights the FIFA Festival!

Starfinder’s group will be led by Delegation Leader Samantha Swerdloff, Director of Programs, and Young Leader Abdul Sule, who is a Coach-Mentor and alumnus of Starfinder’s programs (Class of 2015).  Abdul will travel to Russian two days before the rest of the group to participate in trainings with the other Young Leaders, to prepare him for helping to facilitate throughout the Festival.

Starfinder selected its four teen delegates based on their demonstrated leadership skills and commitment to Starfinder’s core values:

Starfinder Foundation is a Philadelphia, Pennsylvania based youth development organization utilizing soccer to engage low-income youth.  We foster their bodies, brains, and budding leadership skills to develop as strong and healthy individuals. Starfinder’s mission is to enhance the personal growth of underserved youth through soccer and learning experiences that engage, inspire, and motivate.

Since its founding in 2002, Starfinder’s programs have equipped over 9,000 youth from underserved communities with the tools they need to achieve success both on and off the field. Soccer is the hook; success in school, in the community, and in the pursuit of higher education is the goal.

To harness the game’s huge potential and support existing football-based community projects, FIFA launched the Football for Hope initiative in 2005 to help improve the lives and prospects of young people around the world. It offers funding, equipment, and training to organizations running such projects, and organizes events for experts and young leaders so that they can meet, exchange ideas and learn from each other while sharing their experience of working in this field.

FIFA believes that soccer is more than just a game. Through its unique power and universality, soccer can bring people together, transform lives and inspire entire communities. It creates powerful opportunities to break down barriers to social development, education and health awareness. This is evidenced by the hundreds of community organizations that are active in delivering social projects through football across the globe.

The support FIFA has provided through Football for Hope has benefited hundreds of programs run by non-governmental organizations in over 78 countries, serving hundreds of communities and tens of thousands of people throughout the world. HIV/AIDS education, conflict resolution, gender equality, social integration of people with intellectual disabilities, peace building, youth leadership and life skills are just some of the many objectives pursued.